The UK public is one of the most pirated users in the world. Pirating TV Content from Countries such as the USA and Other European countries. But studies have shown recently that there are more people from the UK that tend to watch Free To Air Television than any other channel. Here in the UK, we have so many options available such as services which include (Freesat via a dish) and (Free View via a TV antenna), some of these services don’t require any extra box because most do come built-in via your TV set. 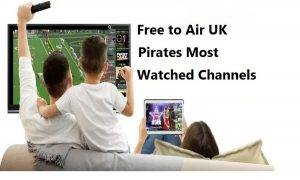 The UK TV License and Free to Air

In the UK millions of people have to buy a TV License to view TV Signals in the home by the UK Law. If we have a color TV then it will cost £159.00 per year and for a black and white picture, it will cost £53.50 Freesat and Free View have the ability to watch hundreds of free channels without the need to subscribe to any other service. Those that try and avoid paying the license fee still have full access and can still receive them, but just not legally.

People who subscribe to an unofficial IPTV Service can gain access to hundreds of premium channels and thousands of channels from all over the world at a very low cost compared to services here in the UK such as Sky TV and Virgin Media. This can save many hundreds of pounds over the year.

A UK based IPTV provider has informed torrent freak that even though having thousands of channels to watch at a really low cost is attractive, his subscribers watch Free-to-Air TV the most.

BBC One, BBC Two, ITV, Channel 4, and Channel 5 bearing in mind every single channel can be watched for free (license permitting) via satellite or antenna.TorrentFreak was also able to review data from a few weeks ago that list the most watch channels.

Why Such An Interest In Channels Already Covered By a TV license And Free-To-Air?

The IPTV provider gave its subscribers a poll and got some interesting responders from it.

The digital Freeview service is available to 98% of parts of the UK but evidence suggests that many are left with a poor signal and breakups of picture quality meaning some channels can be limited and some have no service at all.

(Freesat via a dish) can normally overcome these issues but some TV sets don’t come with a built-in tuner and an outside satellite dish must be installed. Depending on where you live it can be very difficult to get permission to have a satellite dish outside because this can depend if you own your own home or rent.

Why People Choose To Watch There Channel Via A IPTV services

IPTV services only need a broadband connection and a cheap subscription, no external equipment (satellite dishes, antenna, or tuners) required. The Free-To-Air channels can be provided in Full HD quality and provide a much better user experience if you compare it to services such as the BBC iPlayer, ITV Hub, All 4, My5.

RED Box TV App offers allowed you to watch streams with more than 200 TV channels from a wide range of nations. There are sports stations, science stations, Children’s stations, Indian stations, Pakistani stations, Malaysian Stations, German Stations, and so forth. This offers a great deal of amusement and all Read Full Article