AMD isn’t just making excellent strides forward with Ryzen processors, but there are also signs of big successes around the graphics card forward, with the business beating Nvidia for the first time in half a decade in the overall GPU industry – plus AMD has made major increases within the discrete graphics industry, too. So, Intel leads the way with 66.9% of GPUs.AMD moved up into 2nd on 17.2%, which is a 1.5% increase in the final quarter and a leap of 2.4% year-on-year.

Nvidia slipped to 16% although that is only down 0.1% on the previous quarter but represents a drop of 1% compared to this time last year. So as of right now, Nvidia has fallen behind by around 1.2% when all integrated and other graphics solutions are being taken into account. The last time AMD was ahead was back in the year 2014.

This year AMD has shipped over 9.85% more GPUs than they did in the last quarter, Nvidia’s has shipped around the same as normal and Intel shipped 1.44% less than normal. The GPU sales market has grown this time and is up by 9.25% compared to the last quarter and gaining more than 3.1% each year. 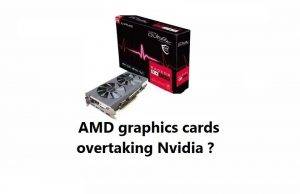 Does Nvidia Need To Worry?

This generation the Nvidia cards seems to be overpriced and underperforming for the price compared to last generation chips. I think this is a good reason for the drop. Another reason might be that Intel decided that Nvidia’s chipsets with integrated graphics were hurting their chipset sales and because of this, they decided not to renew the Nvidia x86 license. This skewed them out of the Integrated market. So now their only choice is Discrete or Arm GPUs.

AMD’s success might be due to some of the bargain-basement graphics cards they offer such as the RX 570,