Moxy Icons is a brand new, unique, shapeless icon pack that pushes the boundaries of what an icon pack can be. It has many useful features and offers some beautiful-looking icons that will please your eyes. This will support Android devices such as phones and Tablets and will come ready and supported with many popular launchers. There’s an option to select 15 different types of wallpapers and including Muzei Live Wallpaper support. Moxy Icons is a Personalization android app made by Patryk Goworowski that you can install on your android devices and enjoy 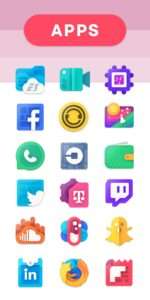 If you would like to buy this app to support the developer then it can be found HERE within the play store. At the moment the full version can be bought for £2.00 in the UK. If you use this and like it the playstore is a good way to comment and rate the app.

If you would like to check out the developer’s other projects check the website HERE if it has many icon packs available. I have to say these are probably the best packs available for Android devices as of now.