Google Data Saver Feature-During an event in New Delhi on Thursday, where the company is expected to make a number of announcements, Google said it has identified and addressed a problem faced by millions of users. Many people are complaining that their TVs are not connected to the internet through Wi-Fi or a wired ethernet line. Google said on Tuesday it is bringing new features to Android TVs.

This will improve things for those that rely on mobile hotspots to connect their devices to the internet. 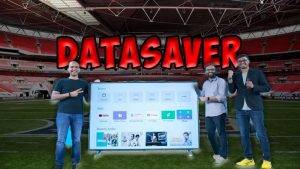 Streaming content can melt away mobile data very fast. According to Google, this new feature rollout will help a little with this problem. The new feature will help reduce your mobile data connections by more than 3 times which will be a great saving for those on a bandwidth cap or those that want to consume more data for watching Live TV.

Google confirmed that the first billion users to have the update would be in India, Other countries are set to have the updates as time follows. This will help people that rely on local network hotspots created via cellphones and tablets. Streaming Your Favorite Movies and TV Shows and Live TV can drain your data cap very fast and you will soon drain those daily data plans.

Watch Offline Media On Your TV

Users are able to watch offline media on their TV from their phones the company is making it easier now.  This will allow users to cast offline media to their TV without using the internet. You will be able to use the new Cast feature on your Android phone. This will allow the user to display photos and videos, etc. from your phone on your TV. Xiaomi TV India Users will have the first rollout of these features. The company is making plans to roll out worldwide and will be coming soon.